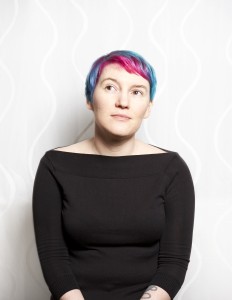 Lindsay Gibb is a librarian, editor and freelance writer with a special interest in zines, comics, film and youth culture. She is also a world renowned Nicolas Cage scholar who has presented at Cage-a-rama in Glasgow, appeared as a Cage expert in various media for outlets such as the BBC, NPR and the US podcasts Wisecrack and #CageClub and whose writing about the actor has been covered by outlets such as Vice, The Ringer and Canada AM. Her book, National Treasure: Nicolas Cage (ECW Press), was named one of the top books of 2015 by the National Post and won the gold medal for popular culture at the 2016 Independent Publisher Book Awards. She is based in Toronto.

Lindsay is the Collection Development Librarian at the University of Toronto Scarborough Library, a professor at Seneca College, and the current Special Libraries programmer for the Ontario Library Association Super Conference. She previously lead programming for the Toronto Comic Arts Festival’s Libraries and Education Day

As a journalist, Lindsay co-founded the award-winning urban issues magazine, Spacing. She was editor-in-chief of Broken Pencil, the magazine of zine culture and the independent arts, from 2006 until 2014 and, as a freelance writer, has written about film, music, literature and crafts for publications such as Made|Nous, NOW, Bitch, This magazine, The Establishment and Exclaim.

Lindsay is also an arts programmer, a zine workshop facilitator, and a regular speaker about comics and zines at conferences.